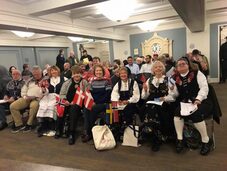 Community support for the park is visible. Within 3 days of the vote, before a fundraising committee for the next phase of planning had formed, ASHA had already received 20k in private donations for the park.

The Scandinavian Heritage Park (SHP) committee, chaired by Judi Lampi, a subcommittee of ASHA, is in the second phase of a multi-stage effort that is slated to take the next two years. According to the organization’s website, phase one was funded through grants from the Oregon Community Foundation. Now, more funding is needed to hire a landscape architect to bring their artistic rendition into a concrete plan.

The SHP committee is currently busy applying for grants from across Oregon, including a matching grant from The Oregon Cultural Trust, “an ongoing funding engine for arts and culture across the state.” ASHA is a registered non-profit with the trust. Oregon Travel is another organization that awards grants to organizations that promote tourism, another goal of the park.

The committee has already met with two possible landscape architects and have two more interviews scheduled. From there, the organization will gather information on the candidates from colleagues and references before finally reviewing and voting on their selection.

At the recommendation of the City Council, the SHP committee has hired retired city manager, Rosemary Johnson as Project Manager. Johnson’s career and reputation in the community proceed her, and she has overseen several projects across her time working for the city. Now in retirement, she does not seem to have slowed down, taking on management of the SHP while also overseeing the restoration of the Doughboy Monument in Union town.

As she came on board, Johnson prepared a history of the site at People’s Park from maps dated 1896 and 1908.The site was previously home to rooming houses, a bakery, and then a Chinese laundry. At another point, there was a photo gallery and a candy, cigar & liquor store, all in one.

The park is also abutting the historic Franciscovich Building. Having an adjacent historic neighbor means the project will have to follow the guidelines and process put forth by the Historic Landmark Commission, which the committee is more than happy to do.

Lampi says that working in concert with Astoria’s historic institutions are part of their vision and is exactly what the committee wants to bring forward. Even as the park focuses on Scandinavian immigrants, it is also about the larger history of Astoria and paying homage to an industrious waterfront.

“The waterfront location is ideal because this is where Astoria worked,” she explains.

Also, the SHP plans to join the Astoria Downtown Historic District Association, and will be keeping local businesses, scandinavian lodges, and park donors informed at every stage. It is important to the committee that the ADHDA be able to give input on the project.

There are additional permitting processes with the city of Astoria along the way, and the organization will continue to work closely the city manager, the city planner, Parks & Rec, and the Astoria Community Development Department.

Lampi says, “The park committee is very excited, we’re working hard and we want to make sure everything is done right, step by step, so there are not future problems.”

The SHP continues to encourage the sharing of stories and connections to the park concept by donors, and certainly, to indicate that donations are park specific.

Given the amount of work and commitment ahead for Lampi and the other members of the SHP committee, community input and inspiration reinforces the worthiness of their efforts.

She says determinedly, “We are going to build Astoria a beautiful park.”

There is also a Paypal link on the organization’s website at: www.astoriascanpark.org.