About the Entertainment
Please Note: We are currently still finalizing the entertainment schedule for the 2023 Midsummer Festival. Please check back for a complete listing soon! 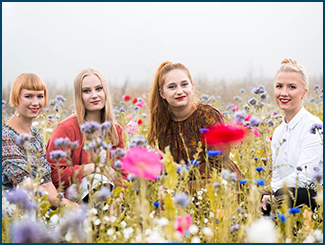 Kardemimmit takes you to a journey into the Finnish Midsummer’s magical night where the sun doesn’t set at all. The air is filled with the ancient mystery of time standing still and the nature is heartbreakingly beautiful at the peak of its bloom. Kardemimmit is the sound of the Finnish forest

Kardemimmit is a band of four awesome women playing the Finnish national instrument, kantele. The band members are Maija Pokela, Jutta Rahmel, Anna Wegelius and Leeni Wegelius. Kardemimmit are in charge of their own music – they compose, as well as arrange, write lyrics and produce. Alongside 15 and 38 stringed kanteles, singing has a big part in Kardemimmit’s musical universe where original pieces with a modern approach still have a strong foundation in Finnish, Eastern European and Scandinavian traditions. The Finnish reki-singing style, 19th century dancing music, Perhonjokilaakso kantele playing style, Eastern Finnish archaic improvisation and ancient runo singing are all present in Kardemimmit’s music.