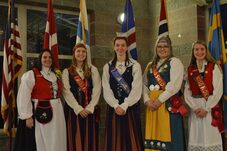 Junior Miss Iceland Holly Bjaranson is from Hammond and has great-grandparents who are Norwegian, Icelandic and Swedish. She learned her heritage from her parents and grandparents and looks forward to the Midsummer Festival so she can dance, participate in the Barnefest (children’s activity area), and make more friends.

Senior Miss Sweden is Madalyn Hellberg from Camas, Washington. Her grandparents are Swedish, Danish, Finnish and Norwegian. Madalyn attended her first festival as a baby and was Junior Miss Sweden in 2008. She’s glad to participate in the court again this year so she can increase her knowledge of her Swedish heritage, gain public speaking experience, and make new friendships.

Junior Court Chaperone Angie Cereghino is an Astoria native and she and her family have been involved in the festival for as long as she can remember. She enjoys being part of the local Scandinavian community and has found lifelong friends there. Cereghino feels that her heritage displays itself in her family life through the Scandinavian work ethic, value of community and her faith.  Cereghino is Danish, Swedish and Norwegian and credits her mother Bonnie Fisher for keeping Scandinavian traditions present in her family’s daily life. Cereghino was Junior Miss Sweden in 1994, Miss Sweden in 1984, and is a member of VASA Swedish Lodge.

Crown Bearer Ty Cereghino is the only male on the 2018 Scandinavian Midsummer Festival Court. His mother is Junior Court Chaperone Angie Cereghino and Ty is a second year member of the Nordic Viking Dancers. With his family, he has been involved in all aspects of the festival from setup to clean up, dancing, eating pea soup (a Swedish specialty) and aebelskiver (Danish doughnuts), and helping with the Troll Run.

Senior Miss Finland Kourtney Tischer is from Knappa and  is sponsored by the Finnish Brotherhood.  Kourtney will proudly wear the same Finnish costume her mother wore in 1994 when she was Senior Miss Finland. Kourtney’s ancestors came from the Swedish part of Finland and some also lived in Norway and Denmark. She’s very appreciative that the Scandinavian Festival keeps Scandinavian culture and traditions alive in the local area.

Miss Scandinavia 2017 is Megan Schacher of Gearhart. In 2017 she represented the Finnish lodge.  She finds all the festivals joyous and uplifting and says they are an experience one never forgets because they connect you to your ancestors and heritage. She loves the food presented at the festival and participates in the dance group and helps in the Finnish booths.  Megan likes to meet new people and hear their stories and says that representing the festival as a court member for a second year has improved her public speaking skills.  She’s always known that her mother was Finnish but recently her family learned through DNA testing that her father is also part Scandinavian!

Senior Court Chaperone Michelle Devos lives in Warrenton where she’s employed by  the Warrenton Hammond School District.  She has family in Norway that has visited the area before and that will return next summer. Devos has good memories of the Op Tog (walking parade) when it was held in downtown Astoria and especially enjoyed the 2016 festival when her daughter Megan was crowned Miss Scandinavia.

Junior Miss Sweden Marlie McCauley lives in Astoria and is sponsored by VASA Astor Lodge #215. She enjoys the Queen’s Ball and Barnefest (children’s activities) at the festival and looks forward to participating in court activities like riding a float in the parades. Marlie claims Scandinavian ancestry from her ancestors who came from Norway and Finland, but mostly Sweden.

Senior Miss Norway Kaitlyn Bakkensen is from Scappoose.  She has an early memory of her first festival at age six when she was kissed by the troll! At the time it was scary but later she realized the troll was one of her dad’s friends and could laugh at the experience and feel good about it. She also enjoyed the time her whole family visited the festival to support her cousin who was Miss Finland at the time. By participating in the court, Kaitlyn hopes to hear more about her own heritage and also more about the traditions of other Scandinavian nationalities.  Katilyn’s grandfather, Joe Bakkensen, had parents from Norway and Denmark and Katilyn has visited the area where some of them came from. 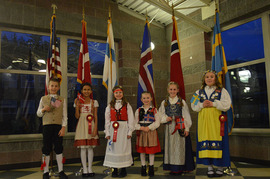