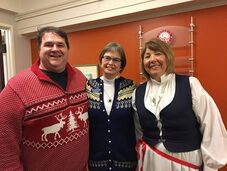 The Astoria Scandinavian Midsummer Festival Association announces a change in leadership. Leila Collier, who lead the festival committee for the past three years, is stepping down. The two new co-chairs are Tony Larson and Carla Oja.

Larson has a law degree from Willamette University and is of Danish descent.  He’s a professional mediator, Chairman of the Scan Oregon Lodge, Life Patron in the American Branch of the International Law Association, and Life Member of the Society for the Advancement of Scandinavian Studies. Tony and his wife, Shelly, live in Portland and have one son, Torsten, and await their first daughter in May.

Oja has a degree in resource recreational management and is an instructional assistant at Lewis and Clark School in the Astoria School District. She’s former manager at Tapiola Pool and a long-time swim teacher and coach. Oja’s husband Alan is of Finnish decent and Carla recently found out through ancestry testing that she is also of Scandinavian descent. All four Oja children were active in the festival dance groups, courts, and flag ceremonies when they were growing up and their mother says they would rather miss Christmas than the Midsummer Festival!

People who are interested in volunteering should contact the lodge of their choice or the festival committee on their website at www.astoriascanfest.com. It is not necessary to be Scandinavian to participate in this community event. All are welcome.