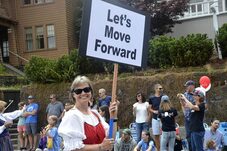 The Astoria Scandinavian Heritage Association is rejoicing that it has finally reached an agreement with the Astoria City Council which will allow it to move forward with its plans for a monument honoring Scandinavian immigrants in the former People’s Park in downtown Astoria on the Riverwalk.  When the monument is completed, the park will be renamed Scandinavian Heritage Park. Fundraising will start soon to fund design, construction, and maintenance of the monument. The Astoria Rotary Club will work with ASHA to maintain the park.  ASHA anticipates it will take up to two years to complete the process.  Follow progress at the newly renamed park website: www.astoriascanpark.org. 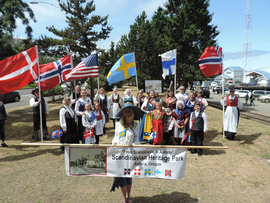 Have you checked out our website lately? It has all the updates for 2021.
www.AstoriaScanFest.org ... See MoreSee Less

Here’s a feel good story about Bob Swenson whose great-uncle Ragnar was a Swedish immigrant who helped build the Astor Column. Bob is a member of VASA Swedish Lodge and helps every year to make pea soup for the festival!

Writer's Notebook: A flower for someone

Bob Swenson has lived on Dow Lane in Youngs River for around 45 years. He’s been making peoples’ day for nearly as long.
View on Facebook
·Share

Thanks for the beautiful daffodils for Bethany Church !

So adorable. Love the heritage!!

How beautiful is this? So special! Congrats!

How do they keep that white hat crisp and clean?!?

March 31, 2021, Astoria, OR - The Astoria Scandinavian Midsummer Festival Association has named Loran Mathews of Astoria as Grand Marshal for the 2021 Midsummer Festival Optog Parade. Because of the unresolved pandemic situation, this year’s Optog Parade will be a drive-by event held on Marine Drive in front of the Maritime Museum between 11 AM and 12 PM on Saturday, June 19.

Despite not being of Nordic heritage, Mathew’s involvement in the Midsummer Festival spans fifty years since 1972 when Ella Simonsen asked him to chair the parade committee. The next year Mathews became chairman of the festival and has since served as chair or co-chair many times and also as budget officer, logistics chair, downtown flags and signs chair, and is currently president of the non-profit Astoria Scandinavian Heritage Association.

Mathews is originally from Newton, Kansas, but arrived in Astoria in 1958 when he served in the U.S. Coast Guard. He met Astoria native Corleen Johnson in 1959 and they married in 1963. Corleen shares her Norwegian heritage with Loran and he has been “Norwegian by marriage” for fifty-eight years now. Mathews enjoys the cultural aspects of the Midsummer Festival, its family orientation, and the opportunity to get together with friends. Mathews’ efforts over the years have helped ensure that the festival continues in an authentic style with an orientation towards family.

Loran and Corleen Mathews have two children who reside on the North Coast – Tara Johnson and Wade Mathews, and four grandchildren. Mathews is retired Director of Support Services for the Astoria School District and a former Astoria City Councilor. He currently serves on the City Budget Committee and as Treasurer for the Astoria/Warrenton Chamber of Commerce. He’s a motorman for the Astoria Trolley when it’s running and a member of the Sons of Norway lodge. Corleen was recently honored for her volunteer service to the community as a 2021 George Recipient by the Astoria/Warrenton Chamber of Commerce.

The Astoria Scandinavian Midsummer Festival Association will not hold an in-person festival in 2021 but there will be many virtual and drive-by events. Check the website www.AstoriaScanFest.org for details. ... See MoreSee Less

A highly respected man of many talents!😎

Great choice! Loran is the perfect guy for grand marshal!

What a great article on Loran. He certainly deserves it. One of the most kindness people I have known. Loran & Corleen, what a super couple

Well deserved Loran! You are one of the best Norwegian civic leaders I ever worked with!

Love the 'Norwegian by marriage' ! Thankful for his service. 🙂

Good for you Loran!!