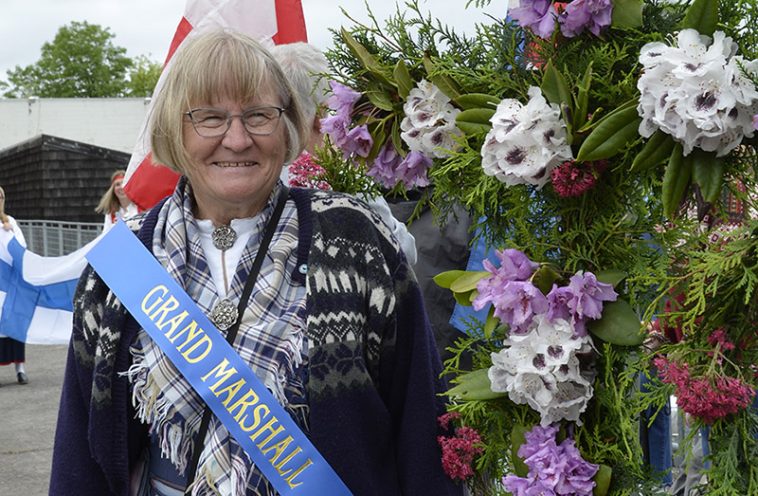 Bonnie Fisher has been named Grand Marshal for the 2022 Astoria Scandinavian Midsummer Festival Stationary Optog from 11 AM to 12 noon on June 11 in front of the Maritime Museum and for the Walking Parade at the Midsummer Festival at 11:30 AM on June 18 at the Clatsop County Fairgrounds.

Fisher has been active in Astoria’s Nordic community for many years and served as Decoration Chair for the Midsummer Festival, Secretary for the Midsummer Festival Association from 2008-2019, Secretary for the Heritage Association from 2011 until now, Senior Court chaperone in 1993, and as a member of the Lower Columbia Danish Society and the Astor #215 VASA Swedish Lodge.

Fisher assisted with the family dairy farm until the cows were sold in the 1970’s. Her professional life included twenty-five years subbing as instructional aide and secretary with the Astoria School District.

Bonnie Fisher’s parents Palmer and June Henningsen organized activities at the Olney Grange for the whole community. They formed the Olney Teenage Club where whole families participated in square dances, plays, and a strawberry festival. The Henningsen family also hosted volleyball and basketball games for the whole community in their Olney barn. Bonnie says, “Taking part in community activities was a way of life growing up. I cannot remember not doing this.” Regarding observing her Nordic heritage, Fisher says, “Celebrating our heritage was a way of life for us. It was not something different.”  Fisher also says, “The Midsummer Festival is always enjoyable and a way to connect with people you don’t see all the time. It’s great that we can keep it going.”

Loran Mathews, president of the Astoria Scandinavian Heritage Association and former Midsummer Festival chair says, “Bonnie Fisher has always been willing to help wherever she can. Most importantly she takes charge of decorations at the Midsummer Festival and her whole family helps with many important chores like collecting cedar, making garlands, and setting up flowers. She organizes the Friday evening beef roast dinner for the Olney Grange and her family provides lots of equipment like tractors and trailers to assist with setting up and taking down the festival.”

Festival president Carla Oja says, “Bonnie Fisher is the epitome of a true volunteer. She one of the first to say ‘I’ll do it’ and then is the first to show up and the last to leave. Bonnie is a hard worker at the festival, at home, and in our community. We are pleased to honor her as Grand Marshal for the 2022 Scandinavian Midsummer Festival.”