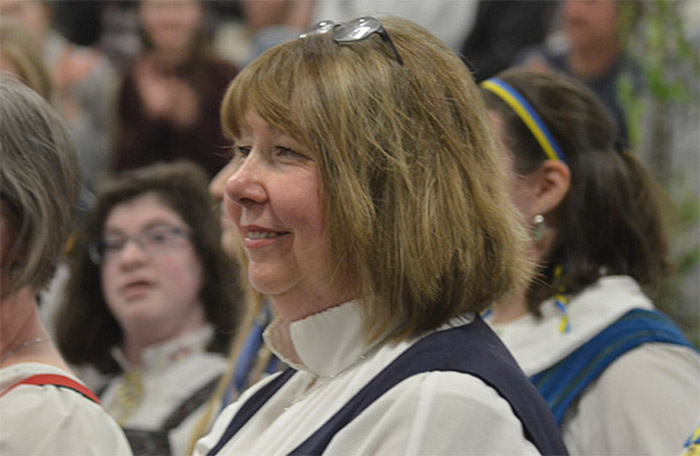 A longtime educator and swim coach

Barring any unforeseen pandemic interruptions, the Astoria Scandinavian Midsummer Festival is a go for June.

And running the show, with lots of volunteer help, is Carla Oja, the festival’s president. It’s one of the many roles Oja has had since she and her family moved from Hood River to Astoria in 1973.

Oja was a manager at the former Tapiola Pool, a longtime teacher in the Astoria School District, a swim coach for Astoria High School, and — one of her favorite titles — grandmother, times 11.

She still serves as an instructional assistant at Lewis and Clark Elementary School and as a substitute teacher on occasion.

So, “coming to school at 7:30 a.m. and finding out you’re going to be in a classroom all day is kinda hectic,” she said. “Always something crazy.”

Oja came on board the Scandinavian festival in a leadership capacity in 2018, when she and Tony Larson were named as the co-chairs.

The two had no idea what the next few years would bring, as the festival — now in its 55th year — would be canceled in 2020 and 2021 because of the pandemic.

“The discussion around our house is that if we don’t come back now, we might not ever come back,” she said. “We tried to limp along over the last couple years. We did the downtown stationary Optog parade, which turned out to be a lot of fun.”

And a blessing in disguise.

The stationary parade, where motorists drive by participants who stand on the sidewalk, “got us downtown again,” Oja said. “We had the festival years ago at the high school, and prior to that at the armory and the old fairgrounds where the aquatic center is.

“We were real visible to people coming into Astoria. We had lots of people who would drive by and honk, and we had a grand marshal and people holding the flags.”

People will see a few changes at the Clatsop County Fairgrounds when the festival returns June 17 to June 19.

“The outdoor stage where we’ve had the flag ceremony, that’s been torn down,” Oja said. “It was in disrepair, so it’s gone.

“The flag raising will be where the midsummer pole is, and we will open at 2 o’clock on Friday.”

The festival unofficially starts earlier that Friday with the dedication of the Astoria Nordic Heritage Park at 10:30 a.m. off Marine Drive downtown, “then we’ll all rush to the fairgrounds for the festival opening.”

Also, “the beer garden will now be at the barn, where we had the church service,” Oja said. “The church service on Sunday will be back in the exhibit hall. And we’ll close an hour early.”

Festival organizers “really wanted to throw a bang,” so Arrival, the ABBA tribute band from Vancouver, British Columbia, was invited back.

Tickets are available at the Liberty Theatre.

“A lot of the reserve seats have been sold already,” Oja said. “We had them for the 50th anniversary and also two years later. This is our 55th year. We want to pull it together and get the momentum going.”

If you don’t see Oja at the festival, you can occasionally find her watching Astoria swim meets.

She coached the Fishermen, along with Paul Gascoigne and the late Paul Dessen, for 17 years, from 1994 to 2010.

“I always miss the swimming,” she said. “So many great memories. But we can’t keep doing everything forever. The baton needs to be passed. I’m sure Alyson (O’Connor, the current coach) is going to do marvelous things. She really loves the kids she has now.”

Oja’s sons, Curtis and Clinton, were both swimmers, as was daughter, Kristin.

Her daughter, Kaitlin, “wanted to swim, but she was a dance-teamer, too,” with Pizazz.

And all of Carla and Alan Oja’s children love the Scandinavian festival .

“As one of my kids says, they’d rather miss Christmas than the Scandinavian festival,” Oja said. “Just like the Regatta and all these things we haven’t been able to have, we can’t wait for the festival. Let’s get back to normal.

“We’re going to be working like crazy the next couple months until we’re done,” she said. “Then we can kick up our heels and say, ‘uff da!’”