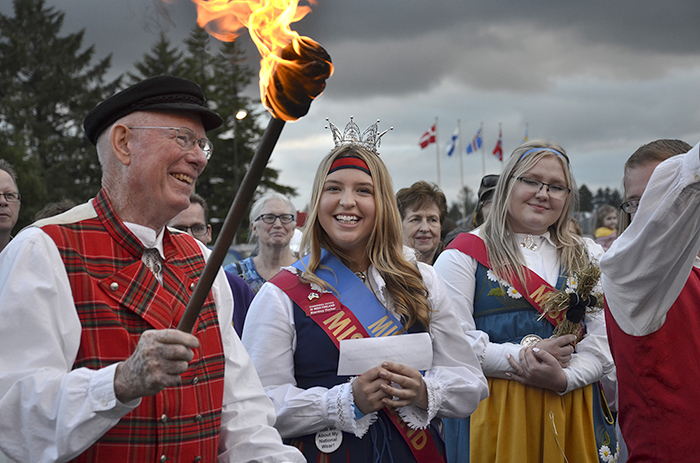 Tradition links us to the past and unites us in the present.

Now, with more than 50 festivals under its belt, the Astoria Scandinavian Midsummer Festival is a showcase for the depth of traditions.

This year’s 52nd Annual festival is held at the Clatsop County Fairgrounds Friday, June 21-Sunday, June 23, and kicks off Friday at 2 p.m. Events are held throughout the weekend and the crowning of Miss Scandinavia from this year’s festival court is at 7 p.m. Friday.

Carla Oja, co-chair of this year’s festival, knows how much the festival embraces generations.

“The boys once told me not to tell their friends they were dancing,” Oja continued. “Their stories changed a bit when they got older. Then it became ‘all the girls want to dance with us because we know how to dance.’”

When Oja’s sons were old enough to go out of the U.S. on service missions, they discovered how much they missed the festival.

Both of them said they would rather miss Christmas than miss the festival. “They looked on the festival as a family reunion,” Oja said.

“Traditionally the festival entertainment focused on dancing and music,” Judith Lampi, publicist for the event, said. “It has grown and evolved to include live theater, reader’s theater, Icelandic horses and a lur player.”

Icelandic horses are mostly pony-sized, but they are still called horses and can carry a 225-pound man.

Joan Paddock, professor of music at Linfield College, will play the lur, an obscure Scandinavian trumpet. Paddock was the first woman to receive a doctorate in trumpet performance from Indiana University.

In 1612 a young Norwegian girl was credited with saving her village from Scottish mercenaries by playing the lur.

“The more popular events are the ones related to heritage and family,” Lampi said. “The festival is about heritage and tradition – it’s the fabric of our community. There’s a lot of pride in working to make this event happen. We want our festival to be authentic.”

Oja agreed and said, “Ours is the most authentic of Scandinavian festivals in Oregon.”

The festival was chosen by the State of Oregon to be an Oregon Heritage Tradition.

In 2009 Madsen’s granddaughter, Jodi, was crowned Miss Scandinavia. Now Madsen watches his great grandchildren participating in and enjoying all the festival has to offer.

Berit and Jorgen Madsen have been part of the festival since 1974.

Family fun and passing the torch

A key thing to remember, according to Berit, is that this is a family festival.

“It’s about family, fun, and heritage,” Berit said. “Kids that grew up here and moved away come back for the festival. The family connection is important.”

Dancing has always been an important part of the festival.

“My kids became friends with a dance group in Portland and they remain friends to this day,” Berit said.

“Multi-generations work to make the festival happen, “Berit said. “The old and the young work together. “The older people are passing the torch to the younger people.”

The older people may not be able to do some of the physical work required to put the festival together so they now direct the younger people on what needs to be accomplished.

The festival gives seniors the opportunity to share their family traditions and history with the younger generations. Those who have never attended the festival have the chance to learn about a new culture.

Visit the festival’s website, astoriascanfest.com, for a full schedule of events and entertainment.