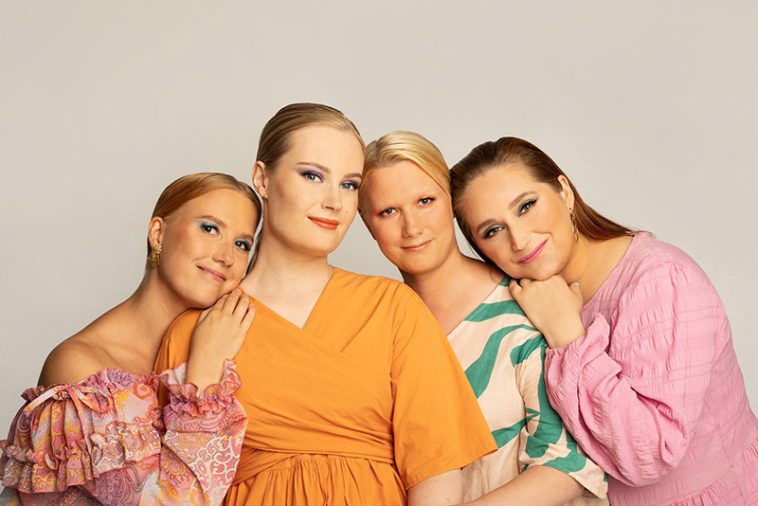 Kardemimmit will be the feature group from Scandinavia to appear at the 2023 Astoria Scandinavian Midsummer Festival. Kardemimmit is an all-female band whose members sing and play kantele, the Finnish table harp. The group has been together for twenty years and recently released their sixth album.

Kardemimmit will take listeners on a journey into the Finnish Midsummer’s magical night where the sun never sets. The air fills with the ancient mystery of time standing still and nature is heartbreakingly beautiful at the peak of its bloom.

The thirtysomething members of Kardemimmit are touring America’s Midwest and East Coast in 2022 and will return in 2023 to tour the West Coast with a stop in Astoria. The four members of the band are all original to the group and include Maija Pokela (b. 1990), Jutta Rahmel (b. 1991), Anna Wegelius (b. 1989), and Leeni Wegelius (b. 1989). Together they compose, arrange, write lyrics, and produce most of their own artistic material. The themes of the music are soul sisterhood in its lows and highs, womanhood and girlhood, witchcraft, solidarity and equality, growing up together and separate, as well as love, heartbreak and jealousy. All members of Kardemimmit have higher education in folk music and a firm knowledge of traditional music that creates a strong undertow to their offerings.

Finnish Soundi Music Magazine says that Kardemimmit has “succeeded somewhat perfectly in the difficult sport of new folk music. Their music is not a prisoner of tradition: they take from tradition and folk musician’s education everything relevant to them and use history and knowledge for their own purposes. Music is born that sounds like Finland and resonates in some archaeological memory, but tells about real feelings and can be generalized to the reality surrounding the listener.”

Kardemimmit will perform five times at the 2023 Astoria Midsummer Festival. Kardemimmit’s performances are included with general admission. The festival will be held June 16, 17, and 18, 2023, at the Clatsop County Fairgrounds.