Reprinted from The Daily Astorian

Complete with birch trees, river views, steamer trunks and trolls, the design for a park to celebrate Astoria’s Scandinavian roots is ready.

The blueprint will be vetted by the Parks Advisory Board and the Historic Landmarks Commission and could reach the City Council by December.

For the people involved, the downtown park has been a much-longed for recognition of their ancestors’ history, something they wanted to build “before it was too late” — before descendants, traditions and stories disappear.

“Astoria is changing so quickly,” Janet Bowler, vice chair of the Scandinavian Heritage Park Committee, said. “I think that is what’s the real push here.”

If all goes according to plan, the Astoria Scandinavian Heritage Association, the group behind the park, hopes construction could go out for bid as early as March with groundbreaking in July, depending on funding.

It would be developed in Peoples’ Park, a small, grassy, tree-filled wedge between Marine Drive and the Astoria Riverwalk near 16th Street. It is little used except by Filling Empty Bellies, a nonprofit that serves lunch to the homeless six days a week.

In the same way the Garden of Surging Waves on Duane Street tells the stories of Chinese immigrants to Astoria, the Scandinavian park will focus solely on immigrants from Denmark, Finland, Iceland, Norway and Sweden.

“We want to educate about the five different countries, the traditions we brought with us and the contributions that Scandinavians made to Astoria,” Bowler told the Parks Advisory Board on Wednesday.

“But we also hope that everyone will realize the hardships that these immigrants went through in order to make a better life for their children and for us,” she continued. “And that the immigrant story is an international experience and that people are still going through that experience.”

The story the park wants to tell of these early Scandinavian and Nordic immigrants begins when visitors leave the Riverwalk, cross the Astoria Riverfront Trolley tracks and approach the park’s main entrance, symbolizing the moment when immigrants left their home countries, said Judi Lampi, the park project chair for the heritage association.

From there, they arrive in Astoria, a moment represented by a plaza featuring a midsummer pole, the countries’ flags and replicas of steamer trunks to double as seating. An interpretive area will detail the work Scandinavians did in Astoria and the contributions they made to the region. A winding path will lead west from the main plaza to give visitors time to appreciate the river views, plants and trees and meditate on what they’ve learned.

The park will not have traditional playground equipment but will include boulders for clambering over. Small troll statues will be hidden across the grounds for children — and adults, said Lampi — to discover.

The heritage association tweaked the design of the park several times, integrating a variety of ideas after a community meeting in September where consultants unveiled two different designs and asked for feedback.

Construction is expected to cost just under $1 million. The heritage association is soliciting donations from individual donors, corporations and foundations. Local and regional businesses have already offered to donate some materials and labor, Lampi said. They have already raised money to pay for planning and design work.

The heritage association had hoped to construct a monument at Peoples’ Park back in 2015, coinciding with the Astoria Scandinavian Midsummer Festival’s 50-year anniversary, but the plan stalled amid city concerns about the Park and Recreation Department’s ability to take on maintenance of another park.

Now an agreement between the heritage association and the city spells out the association’s responsibilities. The association will be in charge of maintaining, repairing and replacing what they build at the park. The materials they plan to use will be durable and easy to clean and care for, and the plants easy to maintain, Lampi said. They plan to remove only three trees.

The association is also responsible for paying any utility costs and is partnering with the Rotary Club of Astoria to help with maintenance.

“It is a true gift to the city,” Bowler said. “We build the park then we give it to the city and then we take care of it.” 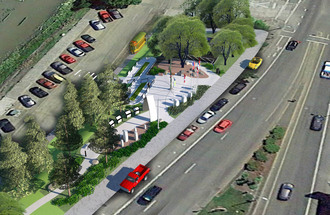 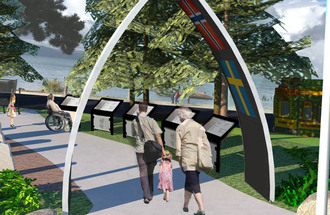